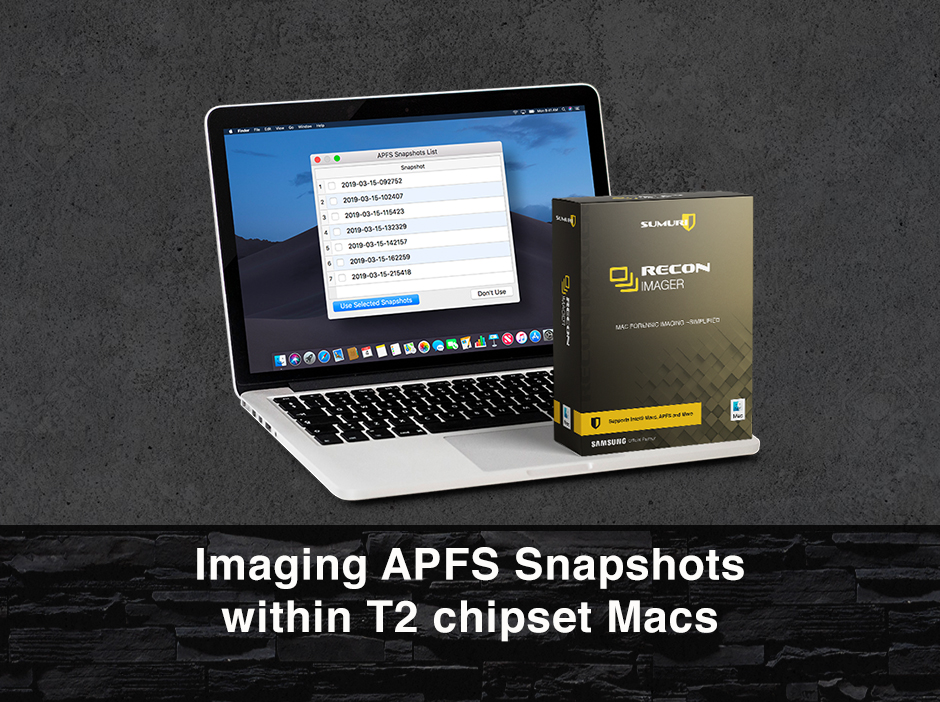 As if APFS wasn’t adding enough complexity for forensic examiners, more and more Macs are now including T2 Security Chipsets. The T2 Security Chipset was borrowed from iOS devices. It serves many functions, however, the one that troubles forensic examiners is that it encrypts data at rest. This means that the files and folders contained within the internal drive of a Mac are always encrypted. For example, if it were possible to remove the internal Solid State Disk (SSD) of a Mac with a T2 Chipset in an attempt to create a forensic image or copy of files you would not get any usable data.

To get usable data from an SSD on a Mac with a T2 Chipset you will need to go through the chipset itself.

Additionally, Macs with T2 Chipsets include two new features to protect data on its internal drive. These features are “Secure Boot” and “Prevent Booting from External Media.”

“Prevent Booting from External Media” is exactly as described. The Mac will not boot from any external media… period.

To turn off any of these features requires booting the Mac into Recovery Mode which is done by holding down the <Command> + “R” keys upon boot. Once in Recovery Mode, a user will be able to select the Startup Security Utility from the “Utilities” menu. In order to make any changes, an Admin password must be known and entered at this time. If you do not have an Admin password you will not be able to disable the features to allow booting from external media.

This means that an examiner will not be able to use a bootable imaging utility without knowing and entering the Admin password and disabling the startup security features.

A workaround to image a T2 Chipset Mac is to place the Mac with the T2 Chipset into Target Disk Mode (TDM) by holding down its “T” key upon startup. TDM essentially turns the Mac into an external hard drive. The Mac in TDM can now be connected to another Mac running a bootable imaging utility such as RECON IMAGER. This technique allows the data to be captured logically.

In digital forensics, it has always been recommended to image the physical disk if possible. This dates back to the days of older file systems and spinning platter disks. With traditional file systems and storage media, it is possible to recover deleted data from free space, unallocated space, and file slack. Times have changed and SSDs are used more commonly. They also work differently.

Since Mac OS X Lion (10.7), all Apple-installed SSDs have TRIM enabled. “Trimming” involves wiping the flash memory cells occupied by a file on an SSD once it has been deleted.

In simple words, when a file is deleted from an Apple installed SSD in Mac OS X 10.7 and higher there is no chance of data recovery.

SUMURI, with Version 4 of RECON IMAGER, has developed a solution to image local Time Machine snapshots of Macs with T2 Chipsets using native Mac technologies. Additionally, RECON IMAGER (V4) can be used to capture local Time Machine snapshots when the password is known and Secure Boot can be turned off and also when the password is not known and the Mac with the T2 Chipset is imaged via Target Disk Mode.

RECON IMAGER (V4) additionally follows traditionally accepted forensic protocols as it is able to hash the source and the output.

Zulu
We use cookies to ensure that we give you the best experience on our website. If you continue to use this site we will assume that you are happy with it.I AgreePrivacy policy
Go to Top